Our Eyes are Wide Open to Media Literacy

Screening of Eyes Wide Open: This is Media

A Review by Talitha Thompson, OTL Intern and SDSU Student

Last week, Outside the Lens paired up with the WorldLink Program at the University of San Diego's Institute for Peace and Justice to screen the film, Eyes Wide Open: This is Media at the IPJ Theater. OTL was fortunate to be selected by NAMLE (National Association for Media Literacy Education) as one of 15 organizations nationwide to screen the film in advance of the national Digital Media and Learning conference held last weekend in Boston, MA. Since media literacy is such an important part of OTL curriculum, we jumped at the opportunity to be a part of this national campaign. We invited WorldLink to partner with us for the screening because we knew that their mission, which is to engage youth in dialogue on important issues, was much like ours, so naturally we felt connected to them and felt that our partnership would make for a successful event.

The evening started out with some simple, yet delicious hors d'oeuvres while the guests registered and mingled. Outside the Lens Youth Councilors were filming and interviewing attendees, asking them about their ideas and knowledge of the effects of media. Personally, I thought that it was a great idea for them to get the opinions of guests before seeing the film so that they could really capture the effects and changes of people's opinions after the screening. We then got settled into the auditorium and OTL's Jennie Goldstone, along with Debbie Martinez of WorldLink, introduced the film. 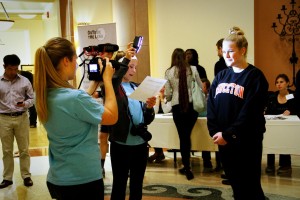 The purpose of Eyes Wide Open: This is Media is to encourage viewers to consider the sources of information and media they consume, recognize their role as a source when producing or sharing content, and explore the trade-offs inherent in giving up personal information online. For me, the film did just that. I went into the screening with a naïve understanding of the effects of social media today, unaware of the fact that these effects are far greater than I have chosen to believe. A few of the many issues that the film shed light on that really struck me include privacy issues, false information both consumed and produced when news is crowd-sourced through social media, and information overload. The film emphasized that what most of us don't realize when using social media sites such as Facebook, Twitter, or Instagram is that we are signing away our privacy. Without specifically finding and selecting the correct privacy settings, we are allowing the sites to have full access to our information and pictures to share with anyone and everyone. Another huge point that the film made was the risk of false information being circulated when social media outlets like Twitter or Reddit become sources. The lightening speed with which information is reported and shared creates an urgency to have answers and believe what we read before the information is confirmed as true. The last point that stuck out to me was the idea of information overload. The film discussed the fact that we are experiencing an overload of information with the amount of different media outlets we have access to today. Instead of going to one or two sources, we now have multiple options to choose from, which can get overwhelming and confusing. How do we know which sources to trust? What are the perspectives and motives behind each source? Although the film spoke about what many of us could say we already knew, it emphasized and made more important the issues of today's advanced media outlets that hold extreme relevance to each of our lives. 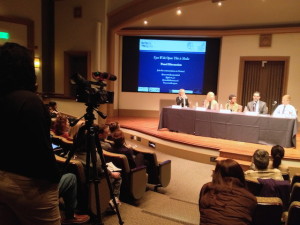 Panel Discussion at Eyes Wide Open: This is Media Screening

After watching the film and trying to digest as much information as possible, we had the opportunity to ask questions to a panel of 5 people regarding their opinions of the film and of their ideas of the issues of media today. The panelists included Alisa Barba, the executive editor of a media collaboration called Inside Energy, Mary Walter-Brown, Vice President of Advancement and Engagement at Voice of San Diego, Bethlehem Desta, Youth Council leader for Outside the Lens and senior at Francis Parker School, and Esteban del Río, Associate Professor in the Communication Studies department at USD. The panel was moderated by Ian Harkness, junior at St. Augustine High School and editor-in-chief of WorldLink’s annual newspaper. Each panelist had very individual ideas and opinions and it was really enlightening to hear so many different views on the issues discussed in the film. Overall, the night was very educational and fun, and hopefully people walked away with their "eyes wide open" to the true effects of media today.

Learn more about Pivot.tv's campaign for media literacy at pivot.tv/eyes

Learn more about NAMLE at namle.net