Over the course of four weekend days in November and December, photographer Kris Hodson Moore led intensive portrait photography workshops for members of Outside the Lens' Youth Council - a group of super-star high school students from throughout San Diego who are committed to developing their photography and digital media skills while giving back to the community. For January's Friday Night Liberty event, The Portrait Project -- a juried selection of the students' portraits -- will be on view at Outside the Lens Media Lab, alongside Moore's Modern Portraits exhibit, a photographic collection of young faces and news of the day. Join us at the Liberty Station Media Lab on Friday, January 3, 2014, from 5 - 8 pm for these two fantastic exhibits!

Kris Hodson Moore began her career as an artistic and commercial photographer in New York City in the 1970s. Her clients were artists, musicians, and the US State Department, who contracted Ms. Moore to photograph visiting heads of state. The 1980s brought her to Albuquerque, New Mexico, where Ms. Moore was the owner, producer and writer at High Fire Productions, creating television commercials and programming that aired on NBC and ABC affiliates. Ms. Moore then took ten years off to try her hand as a writer; after penning a screenplay and a novel she then became a recovering writer, and went back to photography. Ms. Moore is currently working as an artistic photographer and has exhibited at Gallery 21 in Balboa Park, and Interspace Gallery in Escondido. Her 4-week residency at Outside the Lens was her first as an instructor, and she thoroughly enjoyed the experience, impressed by the students' talent, creativity and dedication.

We live in a complicated world inundated by news and images from around the globe.  I am old enough to remember Edward R. Murrow glowering in front of a dark curtain, smoke rising from his lit cigarette.  Or Walter Cronkite reporting Kennedy’s assassination from a cluttered newsroom desk.  I watched as Jack Ruby shot Lee Harvey Oswald on live TV.  September 11th was a nightmare captured in high definition.  I never take for granted the miracle of being able to watch the other side of the world from my living room and now from my phone.

My fascination with news began when I observed my grandparents study the many newspapers they had delivered each day.  Evenings at home with my parents meant everything would stop at 6 o'clock when the national news came on.  Mostly I remember Huntley and Brinkley until Huntley died.  At some point I became loyal to ABC and Peter Jennings, although Tom Brocaw seemed a much nicer person.  Today, CNN is my predominant source for news.  Their sets and graphic displays are theatrical and silly, but still I watch.  When breaking news happens, CNN is the only place to go.  During the Reagan administration, I worked as a photographer for the State Department.  Whenever the Secretary of State was in New York, I covered every meeting and reception.  When I watch a big story on TV, I run for my camera.  It's visceral.  I have to get the shot (even though someone else already has). 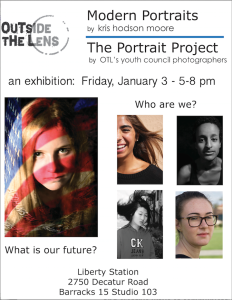 I also love to study faces.  Not so much for what a face reveals about character, if it even does, but for the way it looks.  The angles in a face are beautiful to me.  I wish I could select people out of a crowd, no questions asked, and put them in front of a plain background, fuss with the lights a bit, and shoot.  But it's awkward to ask someone you don't know to pose for you.

The series Modern Portraits combines a passion for television news with my fascination with faces.  The way things look is very important to me, but I am not a shallow person.  I combine portraits of young people with snapshots taken from my television to describe the contrast between the life they are living now and the challenges they will soon confront.

The tone of this series is at times ominous. Past a certain age, our faces are etched from a lifetime of experience.  Young people approach their lives fresh and curious, ready to take on any challenge.  Our complex world will test and enrich them in ways that cannot be predicted.  What happens to them tomorrow has much to do with what happens to someone else today.  It will be a long time before they understand what a small world we live in.