It is a combination that is very odd, simply because it is something you can’t possibly understand the first time someone explains it to you. But at the same time the blend of nature, time, physics, and what the human eye can’t see, turns into something magical. The idea of star trail photography is very strange and has been around for quite sometime, but with such great advancements in todays cameras, more photographers have taken advantage of this wondrous effect.

To explain how this works you have to close your eyes and imagine yourself in a dark area far from the city lights where nothing can be seen but the wonderful starry sky above you. You set up your camera so that it is perfectly still and pointing towards something you can focus on, such as some mountains or an old tree. While still making sure that the stars are visible in the sky the camera is set to “bulb” mode so that the shutter remains open and setting the aperture to something between f/11 to f/22 so that the photo won’t be over exposed. A lens of 18mm or less is preferable for a good shot, and the ISO set at the lowest possible option so that the image won’t be grainy (you are not expected to picture the settings). 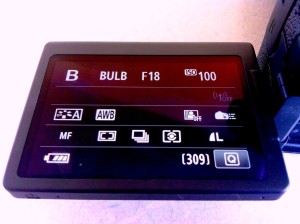 The setup is pretty simple but for some this can be a weird situation for a photograph, and it is completely understandable because its not an everyday scenario, but it just gets better. You also have to make sure you have a camera remote that can lock your camera shutter and hold it open for as long is you want. Then, the magic begins. You lock your camera on bulb, but there’s a catch. The camera shutter must remain open for more than 20 minutes for a minimal effect, but less than 4 hours for an amazing shot. Once that shutter is opened you let earth do its job. The image will be processed as the following: The mountains we focused on are just as they were before, still and tall. But the stars, the ocean of specks that hover over the mountain range appear as though earth went into light speed. But what happened? The same idea of a blurry photo comes into play here. When a shutter is opened, and an excessive amount of movement occurs, and the shutter is to slow, it causes the image to blur. So in this case everything in the image was completely still, except for the stars, even though in reality it was earth moving not the stars. There are even times where streaks of shooting stars get caught in the image.

Although time consuming, sometimes stressful, and cold (depending where you go), there is an overwhelming satisfaction at looking at your photograph and seeing something truly beautiful, and the occasional “no way you took that! thats totally photoshopped!” that comes along with it. But words cannot give you the feeling of joy that this effect brings you, so get out there and take advantage of the wonders that live above you.

-Posted by Outside the Lens intern Eden