“At first I thought that education was valueless. After coming to [the Dual Language Symposium] and seeing how much everyone cares about education, I now see the value in it” -- Ariana, 10th grade student, Hoover High School

Tenth grade students from Outside the Lens’ Cameras in the Classroom program at Hoover High School were recently invited to perform their “Here I Am” spoken word piece at the Dual Language Symposium held at San Diego State University. The Dual Language symposium brings together over 200 educators, administrators, and researchers to tackle issues on language in education, as well as inform educators on methods to succeed in the multilingual classroom. The piece presented by Outside the Lens students featured original poetry and photography that represented the students and their environment.

Here is their story through the eyes of Outside the Lens Media Educator, Iggy.

The early morning for our high school students started off just right -- with a scrumptious complimentary breakfast burrito. After eating everyone headed back to the green room to rehearse their poems. The students nerves began to show, and as the time for our performance grew closer they became frantic. The intensity of the moment was apparent. However, where they felt fear, I felt excitement. As an educator, I could see the intensity of the experience would help our students in finding a way out of their own comfort zone.

It’s 20 minutes before showtime. “BRING IT IN EVERYONE!” I told them. They scrambled about to throw their hands in the circle. I felt like the coach of a team in a sport’s film, right before entering the big game. “ALRIGHT, I remember when the season first started, barely any of you could catch a ball or even run 5 miles without throwing up, NOW THAT’S ALL CHANGED, YOU’RE A TEAM NOW, YOU GOT THIS! NOW GO OUT THERE AND MAKE US PROUD! OUTSIDE THE LENS on 3, OUTSIDE THE LENS ON ME...1 2 3, OUTSIDE THE LENS!”

Back on the stage sat keynote speaker, Dr. Joseph Johnson, Dean of San Diego State University’s College of Education. His strongest message was confronting teachers without passion- how can students have a desire to learn if their educator is not even into their own material? He was clearly an experienced speaker, and his own passion for education was beyond infectious. His expressive gestures, speech patterns and powerful message were felt deeply by the entire audience, including my nervous students. Honestly, his speech deserved to end with a mic drop, fireworks, and a bombardment of trophies.

Now, it was time for our students to perform. How could they follow this grand act? See their reactions here:

The students finished and went to the center of the stage for a bow. One by one, each audience member in the massive hall rose to their feet, applauding until there was a full standing ovation. My students stood speechless in this unexpected response, feeling the overwhelming recognition and power their stories had ignited in the room. As a Media Educator, I was simply humbled.

After the performance, the students were swarmed with admirers thanking them for their powerful words. A woman told Diana thank you for empowering sisters of her nationality. Another woman told Christian how from now on, whenever she sees brown leaves she’s going reflect back to his poetry.

Suddenly, the students were pulled to do a short interview with filmmakers who were documenting the conference. I worried about their reaction, but the nerves of the greenroom had finally dissipated. Now, they stood in front of the bright studio lights, lavalieres, and giant news camera changed- energized, empowered, and ready to share their story. 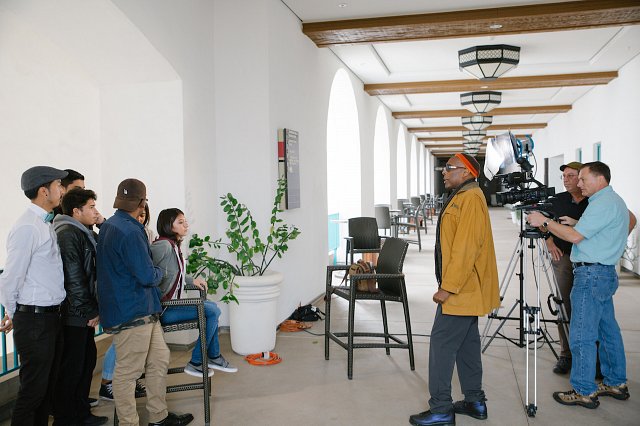 That day was very inspirational and motivational